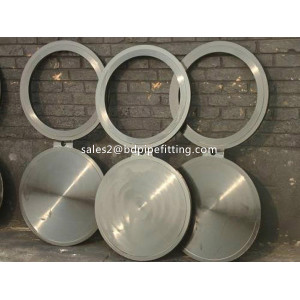 Packaging: Wooden Cases or as per buyer's requirements

Spectacle Flange consist of a connected ring (spacer) and a plate (spade).Spacer & Spade

We are manufacturer of Ansi Blind Flange and supply high quality Blind Flange in both large and small quantities worldwide and offer you the best prices in the market.

Spectacle Blank are generally applied to permanently separating pipesystems, or just to connect with each other. A Spectacle Blind is a steel plate cut into two discs of a certain thickness.

The two discs are attached to each other by section of steel similar to the nose piece of a pair of glasses. One of the discs is a solid plate, and the other is a ring, whose inside diameter is equal to that of a flange.

Maintenance on a pipesystem can be a reason to rotate the spectacle in the "close" position. This run will take place through the hole, that is drilled in the connection piece. By loosening of all bolts, and partial removal of their, the Spectacle Blind can be rotated. After replacing the gaskets (new gaskets are to recommend), the bolts can be re-assembled and tightened.

Spades and Ring Spacers are basically the same as Spectacle Blinds, except that both are not attached to each other.
Spades and Spacers be applied in systems where maintenance is often not necessary, or in applications with large pipe sizes. Depending on the flange size and the Pressure Class, Spades can weigh hundreds of pounds. To prevent unnecessary weight to a flange connections, usually will be chosen not for a Spectacle Blind, but for 2 separate parts.

So as for the Spectacle Blind Flange already described, maintenance on a pipesystem can be a reason to temporarily replace a Ring Spacer for a Spade. By loosening of all bolts, and half of the bolts temporarily remove, the Spade or Spacer can be placed. After replacing the gaskets (new gaskets are to recommend), the bolts can be re-assembled and tightened.
A small problem is that we basically can not see, or a Spade or a Spacer mounted between the flanges. Therefore the handles are often specially marked, or both have a different design; a customer often provides its own specification.

What should never lack is, that in the handle, the diameter and the Pressure Class of a Spade or Spacer is engraved; this applies also for the Spectacle Blind.

The sealing surfaces of a Spectacle Blind, Spade or Ring Spacer are usually conducted in accordance with the Face Finish from the flange. The diameter always is slightly larger than the Raised Face of a flange; by a correct assembly, the bolts are just not touched by the Blind or Spacer.
The diameter of them, is depending on the flange size, and the thickness from the Pressure Class of a flange.

Dimensions from Spectacle Blinds, Spades and Ring Spacers, you will find in the main Menu "Flanges"

ASME B16.48 covers pressure-temperature ratings, materials, dimensions, dimensional tolerances, marking, and testing for operating line blanks in sizes NPS 1/2 - NPS 24 for installation between Asme B16.5 flanges in the 150, 300, 600, 900, 1500, and 2500 Pressure Classes.
Spectacle Blinds, Spades and Ring Spacers should be made from a plate or forging specification, approved for use by ASME B31.3, of essentially the same chemical composition as the mating flanges and piping involved.

If a piece of equipment needs to be inspected or removed from service then the plate covers the ring to form an airtight seal which consequently isolates a section of line or the piece of equipment. It provides a permanent or long term isolation device.

Our spectacle flange are designed to ensure that an item of equipment can be securely blanked off, with no possibility of leakage in the valve.
Because safety is so important to the function, we assure that they are tested rigorously to client`s specifications.
Our spectacle blinds, spades and spacers come in pressure ratings of 150lbs, 300lbs, 600lbs, 900lbs, 1500lbs and 2500lbs
Spectacle blinds, spades and spacers are available dimensionally in accordance with API 590 and ASTM 16.48 or any of our customer requirements.


They can be supplied in any grade such as

A spectacle flange is a specialty flange made of two metal discs attached in the middle by a small section of steel. Spectable flanges get their name because they look like a pair of reading glasses, or spectacles. Spectacle flanges, also known as spectacle blind flanges, are most commonly used on piping systems that need to be separated regularly or where the flow through the systems is regularly stopped. One end of the spectacle flange is solid, while the other end has a hole in the center. The spectacle flange can be rotated to place either the solid or hollow end within the pipe system, thereby opening or closing the flow. 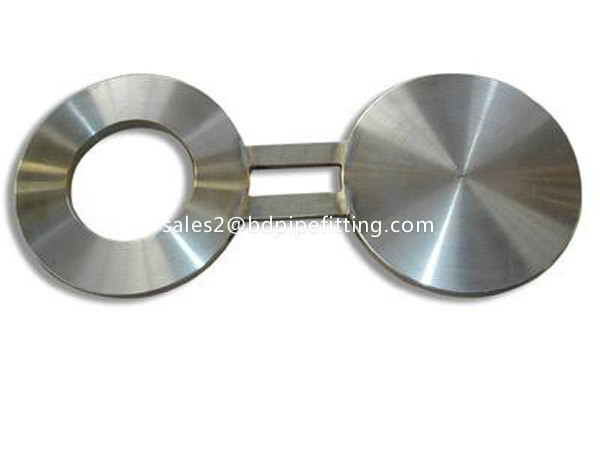 Looking for ideal Spacer & Spade Spectacle Blank Manufacturer & supplier ? We have a wide selection at great prices to help you get creative. All the Stainless Steel Figure 8 Flange are quality guaranteed. We are China Origin Factory of Asme B16.5 Forged Steel Pipe Fitting. If you have any question, please feel free to contact us.